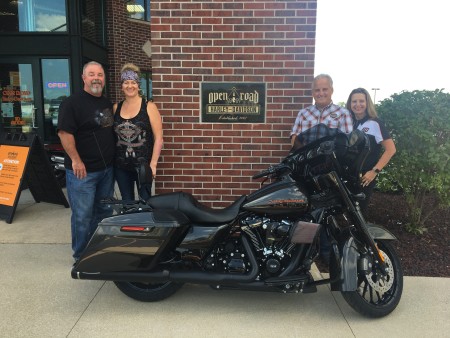 The love of riding motorcycles in Sturgis, South Dakota makes for a dual love connection for two local couples.

Pete Johnson and Lori Thiel uniquely met in Sturgis, SD in 2005 by coincidence in Hog Heaven Campground during the infamous Sturgis Motorcycle Rally.  Both native to NE WI, and they hadn’t known one another prior to their journey to the Wild West.  They became best friends, husband and wife, and business partners of Open Road Harley-Davidson in Fond du Lac.  Powersports was a big part of their lives prior to meeting and certainly ignited their connection.

Fast forward ten years. Ironically, Doug and Danielle Hester met in Sturgis during the rally in 2015 in Hog Heaven Campground.

At the time Doug was living in California and Danielle in Fond du Lac. When they met, they both had other relationships they were committed to, and went home feeling the spark for one another even with many miles in between. After his return home to California, Doug kept thinking about Danielle and decided to reach out to her on Facebook, that message started a beautiful friendship, and 60 days later he made a visit to Fond du Lac.

A long-distance relationship became not as long in 2016 when Doug moved to WI for the love of his life. Their love story, coming together over 2,200 miles, strengthens their faith that everything happens for a reason. Doug and Danielle married in 2018 and continue to live life to the fullest. Both couples got acquainted at Open Road Harley-Davidson as Doug and Danielle were shopping for a new bike.

Recently they got to talking about how they met one another.  “In all the years we’ve been a Harley-Davidson dealer, we hadn’t met anyone with a story like ours until now. The passion for riding Harley’s literally brought us to the love of our lives.” Said Pete.

“We’ve met some of the most quality people while riding, many have become our closest friends,” said Doug. Love comes in many different forms, these two connections came all because of chemistry in a campground on Harleys!