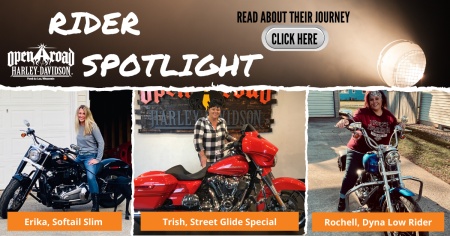 Erika got her temps this summer after not passing her ride course class for the 1st time. Already having her temps, she stayed determined and still decided to forge ahead with being a biker chick. As Erika looked back at her experience and timeline, she felt some clarity in her life. Trust was a huge factor in her process. Erika received advice and support from friends and enthusiasts, which ultimately led her to buy from a dealership for a quality experience of learning about becoming a motorcyclist. She ended up choosing a 2020 bike for the enjoyment of the model and having the warranties and support.

This experience has given Erika TONS of excitement. She worked hard and had to have lots of patience for this learning experience. She had to trust other people, the right sources, and most importantly herself.

As a mom, it was important to find the right process and to be strong through it all.

Erika has enjoyed her riding experience so far. She has almost hit 100 miles and has done lots of solo riding. So far, she is staying close to home but loves getting up to 55 MPH with smiles.

Getting into riding is a big commitment, but Erika would tell any female interested, “Do not hesitate, but just do it!” Erika still chooses not to be fearful of what happens after she decided to ride. She continues to choose healthy thinking and enjoys the freedom of the Open Road!!

The day she picked up her first bike, she rode it home beside her husband with a car full of kids. She kept in mind that she had not ridden any motorcycles since the class. She leaped and showed him up even though she was scared shitless. Her kids were so proud of her and were shouting at her from the car window saying, “Mom!!! Slow down!!” On her first ride, a turkey flew out, but she kept on riding. She wanted to surprise her in-laws and show them that she could ride a motorcycle. Trish started out riding slow. Then she gradually started riding together with her husband, and Trish hasn’t looked back since.

One of the most memorable moments for Trish was when she took her Sportster grocery shopping with a backpack on. Trish bought a full-size watermelon and strapped it to the back seat. She’ll never forget, the lady in a minivan who stayed and watched Trish as she casually loaded up for the ride home. She strapped the watermelon to the back seat, and the lady watched her drive off, taking a mental picture in disbelief.

Motorcycles although they are heavy, they are too much fun to leave sitting in the garage. It’s normal to be nervous on hills, but having a big support network is very important to build confidence. Trish never thought she would buy from a dealership, but the warm welcome from Open Road H-D just changed her mind. Staff members Corey, JB, and Britt, worked hard to help her in the process of achieving her dream.

Trish commutes about 45 minutes to work and loves the fuel efficiency of riding a motorcycle. She works in healthcare while studying to be an RN, she does get some surprised expressions from her co-workers and patients. She’s even taken her son to baseball and was the only mom who picked him up from baseball on a bike. Going to work on her motorcycle and including her kids with her passion for motorcycles is something she enjoys.

After much deliberation and convincing from her husband, and friends at Open Road H-D, Rochell got her motorcycle temps in Spring 2020. Then, her husband surprised her with the Buell Blast, but she was having a hard time getting the hang of it at first. It took her three days to get it out of the driveway and not kill it. “You can’t drive everywhere in first gear,” her husband told her. For Rochell, the Buell Blast was different from the scooter. She understood the concept of driving manual cars but struggled with stopping & going on the bike. After getting introduced to her first motorcycle, she took the riding class in June and has been a badass biker chick ever since.

Since March of this year, Rochell only rode 900 miles on her Buell Blast before deciding she was ready for a “real Harley.” She wanted to go riding with the guys and wanted to sound like them. Her new Dyna Low Rider is blue, but she has the goal to paint it white or pink to make it more girly. Rochell jokes that “maybe my husband will ride it less,” if it’s pink. Rochell loves her Dyna Low Rider, especially all the chrome, LED lights, and the loud sound. She purchased the bike in August and has already put more miles on it than her first bike!

She LOVES transforming from businesswoman to biker chick. She has an H-D Tattoo on her arm in memory of her dad, along with nine others. They are all hidden, and when she tells people from her professional life that she rides a motorcycle, most of them are pleasantly surprised. I just want  something added along the lines how I feel honored to be a lady driver in a heavily man driven sport. That if feels awesome to ride as good as they do and keep up with them. Rochell is proud to be a woman rider and the true passion she has for it shows.

Rochell's first time going over 45 mph and getting on the Highway was on a test ride with Open Road H-D employee Brad. She didn’t give herself time to think about it and just went out and did it. She decided to trust her experience and new skills. Her daughter Hayden loves that her mom rides because they can ride as a family of three. Riding has been a great outlet during this pandemic because she can go out riding as a family. She enjoys making great memories instead of dwelling on the pandemic.