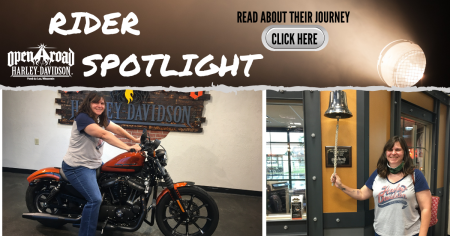 New female rider, Angela, buys her 1st Harley after being in the passenger seat for over 20 years.

Angela and her husband enjoyed a lot of riding on a touring bike in their younger years. Later on, they purchased a smaller bike but realized it wasn’t as comfortable for two-up riding on long trips. This inspired Angela to start her journey to becoming a lady rider and eventually purchasing her first motorcycle.

Angela started by taking the Motorcycle Safety Course to learn the fundamentals. “The course was pretty informative. It was fun being on the motorcycles, learning how to do different things, and just getting comfortable on the bikes,” Angela said.

The Motorcycle Safety Course prepared Angela for the next step in her riding journey. She and her husband had owned Harley’s for over ten years and they enjoyed the lifestyle. She weighed several options before making her big purchase, but the second she sat on a Sportster, she just knew it was the one. She then went on to purchase her dream bike, a 2020 XL883N Scorched Orange/Silver Flux.

Angela may have been inspired to start riding for several reasons, but the unconditional support from her husband and Open Road Harley-Davidson helped make her dream become a reality.

“For anyone interested in riding, just go for it. Be patient with yourself, take the time to learn correctly, and stick with it. If riding was easy, everyone would do it. You have to work for it, and that’s what makes the whole experience cool,” Angela said. Every new rider's journey is different, and that’s why the stories about the open road are so special and unique.